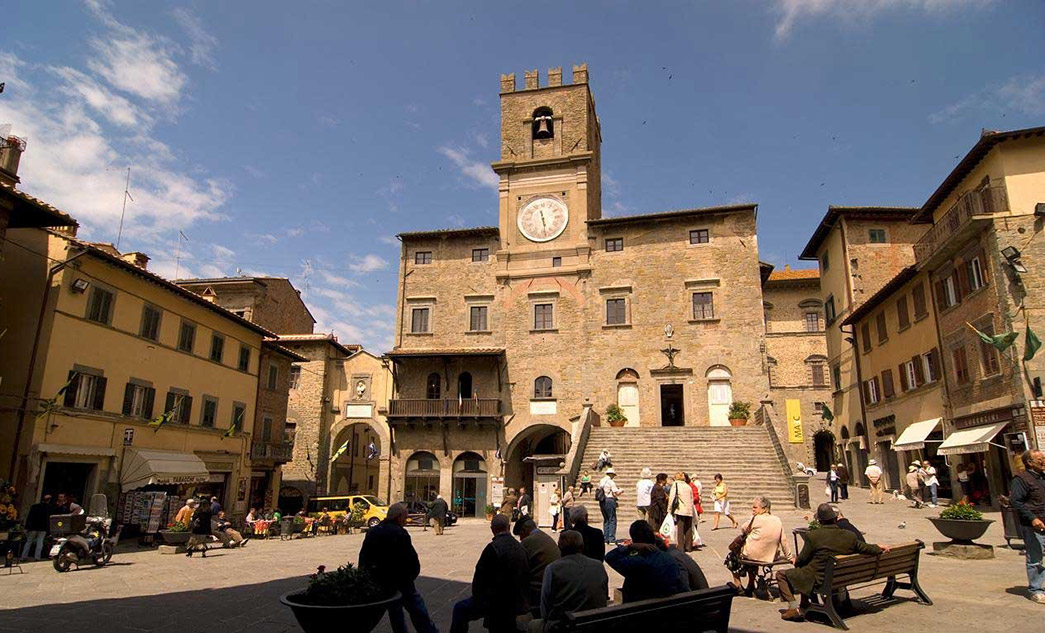 Cortona is undoubtedly the Gem of Tuscany, with its long fascinating history between myths and reality (in his “Aeneid” Virgil said Cortona was the mother of Troy and the grandmother of Rome) and many stories about the founding of this Etruscan town.

In recent years, Cortona has become well known to English speakers thanks to the best-selling book and film by Frances Mayes “Under the Tuscan Sun”.

Cortona is situated on the border between Tuscany and Umbria on a 600 m high hill from where you will see the breath-taking panorama of the Valdichiana valley, Lake Trasimeno and the green hills of Umbria. What is known is that Cortona was a fortified city occupied by the Umbrians and became an Etruscan walled city between 800 and 600 B.C. While visiting Cortona you will see the history of the city reflected in the city walls: the base consists of large Etruscan slabs with repairs from the Roman era in the middle and smaller stones on top dating to the Middle Ages.

Cortona is definitely one of the best places where arts, history, environment and tradition are perfectly mixed up, where you can taste traditional and authentic Tuscan recipes, and where you can still find tranquillity and a good lifestyle.

After enjoying a relaxing traditional meal in a great trattoria or restaurant suggested by your driver, the tour will continue with a beautiful journey on a stunning scenic route with enchanting views across the green hills of Umbria and running along the banks of Lake Trasimeno.

Assisi is the second stop of the Tour. Assisi is one of the most important places of pilgrimage in Italy and owes its fame to St. Francis, the patron saint of Italy, who was born here in 1182. He was the son of a wealthy merchant who, after spending his early years in a life of dissipation, devoted himself to the service of the poor and the sick, founded the Franciscan order and died in 1226 in poverty and abstinence. His life, around which there are many legends, has inspired major works from famous artists (including Giotto). With its well-preserved medieval streets and houses and its treasures of art, Assisi is one of Italy’s greatest tourists sight.

Assisi is not just a mecca for Catholics, art and architecture lovers from around the world flock to this small city that is overflowing with artistic treasures. Your visit will start with the Basilica of St Claire, in the upper town. The church is the burial site of Claire, founder of the female Franciscan order, and it houses the famous wooden cross of St Damien that, by tradition, spoke to St Francis. Passing on the nearby Piazza del Comune, the Town Hall and some other 13th century buildings are worthy a visit, above all the Roman Temple of Minerva dating back to the 1st century B.C.

Then from the main square, taking a beautiful backstreet going down to the main church, the Basilica of St Francis, which contains the sacred tomb of the patron saint, and magnificent frescoes by Cimabue, Giotto, Simone Martini, and Pietro Lorenzetti.

On the way back, Perugia is the last stop of this daily tour to Tuscany and Umbria. Perugia is the capital city of Umbria and is a highly esteemed artistic city in Italy with stunning views and a wonderfully rich history. It is known as the ''city of the infinite views'' and is also famous for its chocolate (namely the Perugina Factory with their famous Baci).

You will have the chance to stroll about along the old town streets. Perugia was founded by the Etruscans in the 7th century B.C. It boasts a historical center that is one of the largest and most varied in Italy. Walking on the elegant and refined Corso Vannucci, you will be able to see the beautiful sculptural work of the Fontana Maggiore, the Cathedral and the Palazzo dei Priori.